I am a consultant and facilitator with over 25 years of experience in the national and international non-profit sector.

Facilitating and managaging dialogue and change processes have long been the common thread in my work. I studied philosophy and physics, as a dialogue between the humanities and science, with a focus on the social roles of science and technology. Later I studied mediation, organization development and coaching.

I became an engineer with an understanding of social processes, a philosopher with a keen eye for the possibilities and limits of technology and science. I became a generalist who is able to connect the dots between seemingly unrelated issues. I became a manager with an ear for people and a consultant who expects the unexpected.

I am married, 55 years old and was born in the Netherlands. After a several years in the Balkans, I have been living in Frankfurt am Main for over 15 years. In my private life I read literature and comics, enjoy art, play music, chess and badminton. I speak several languages. Next to my consulting work, I am researching the role of dialogue in peacebuilding. 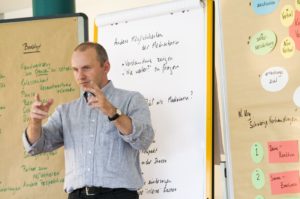 This website uses cookies to provide the best possible user experience. Cookie information is stored in your browser and performs functions such as recognising you when you return to our website and helps me understand which sections of the website are most interesting and useful to you.